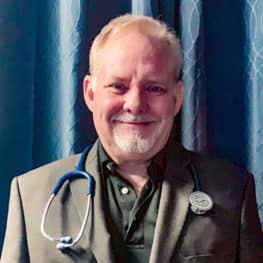 Delegated Prescriptive Authority
Texas Board of Nursing/Texas Medical Board

Robert Morgan APRN owns and operates Kingwood Health & Wellness Clinic (KHW Clinic), located in suburbia Houston. He serves the underserved in the surrounding communities. Serving as an adjunct professor for several different universities, he mentors nurse practitioner and doctoral students. Along with several colleagues, he founded an institutional review board at KHW Clinic (IRB) and is involved in several studies in thyroid optimization. He also co-founded the American Association of Hormone Specialists and is working to build the Association with Hormone Specialists trained by World Link Medical. His primary focus is hormone and thyroid replacement. He has been a Registered Nurse since 1993. He graduated from the University of Texas Medical Branch-Galveston in 2003. After graduating UTMB in 2003 he became Board Certified Acute Care Nurse Practitioner through ANCC.

Throughout his career, he has served on various Quality Assurance committees, Policy & Procedure committees in virtually every job position held. Mr. Morgan was instrumental in the implementation of protocols and training of the nursing staff at Clear Lake Regional Medical Center for various projects including the Neuro program with Dr. Richard Westmark. He also served as a resource and preceptor in the medical/surgical ICU. Robert was involved in the first clinical trials for TPA in the suspected CVA patients while working at CLRMC. He then accepted a staff position at UTMB Hospital working in the SICU. Very rapidly he became a resource nurse, giving in-services and staff training. He worked closely with the Clinical Educators and started a Journal Club in a collaborative effort with the School of Nursing and the education department. Mr. Morgan served on the Magnet Steering Committee to gain accreditation for UTMB. He also served on several policy and procedure committees. He was promoted to Assistant Nurse Manager of the SICU and followed as Interim Nurse Manager for a while. With school pressing for the graduate studies, Robert eventually resigned from management to further his academics and transferred to the PACU. In the PACU, he served as a unit resource educator and preceptor. Robert became involved in the Texas Perianesthesia Nurses Association and served 3 years as president elect, then president and finally as past president. While serving as President of the Texas Perianesthesia Nurses Association, he was required to preside over the meetings and presented monthly CE presentations. To complete graduate school, Robert chose the non-thesis project, and his work was on the recent emerged Women’s Health Initiative (WHI) on Hormone Replacement Therapy. When he completed Graduate School, he was recruited by physicians to work as a hospitalist in Beaumont, Texas for the Emergency Room Services but a turn of events led him to working with Dr. Robert Zayas who was interested in his graduate work on hormone therapy. This was where he started getting a large amount of training in hormones and thyroid. Dr. Zayas was a Harvard graduate with a wealth of knowledge. While working with Dr. Zayas, they started a thyroid research program looking at optimizing thyroid levels to decrease the occurrence of diabetes and cardiovascular problems. Another physician by the name of Luis Rodriguez came onboard and he too was doing research on thyroid for much of his career. During this time period, Robert developed and copyrighted the Thyroid Decision Tank© which is a simple way to explain thyroid treatment to other providers and in-patient education. After a couple years with Dr. Zayas, he was approached by renowned author Dr. Jonathan Wright regarding his work with hormone therapy. He asked me to consult with him and Dr. Larry Webster to contribute to the book Ageless by Suzanne Somers.  He mentored Dr. Webster for a 40-hour week observing and hands-on clinical to learn everything he could regarding hormones, hormone pellet implants and thyroid treatment. Some of his information was incorporated into Chapter 23 of the book Ageless.

Robert was then introduced to Dr. Jason DeMattia and they had a lot of the same passions for hormones and thyroid as well as aesthetics. This seemed to all go together because the patients who want to take care of their bodies and live a productive live also want to take care of the way they look. Robert took a position working with Dr Demattia and associated and then opened several small community clinics. Meanwhile after the WHI results, many studies started emerging and so Robert became fully immersed in conferences and studies to try to become the best he could be in the field. He studied the works of Dr John Lee, Drs Goldman and Klatz, Dr Pam Smith and others who were pioneers in the field. Eventually through a colleague was introduced to Dr. Neal Rouzier. Dr. Rouzier is known by the medical community around the world as one of the top doctors and expert in the field of hormone and thyroid replacement therapy. Robert began attending Dr. Rouziers’ courses and in January of 2015, he completed the program offered through World Link Medical and became certified in Advanced Bio-Identical Hormone Replacement. Robert is currently still pursuing a Fellowship in Functional Medicine Fellowship offered by MMI through the University of South Florida.

Robert Morgan’ commitment to the field of Nursing and to advance the practice never slows down. He works primarily treating patients in the preventative management of obesity, diabetic and cardiovascular disease.  Treatment modalities included dietary counseling, behavior modification, exercise counseling, treatment of underlying hormone imbalances and pharmacotherapeutics consistent with the most current research and literature. To his peers and colleagues, he is a Nurse Practitioner pioneer in the treatment of hormone and thyroid treatment. He still serves as a preceptor and resource for many health care professions including nurse, nurse practitioners, physician assistants and physicians.